Over the years, “Ray-Ban” has become a paragon of choice sunglasses through its unique style and unmatched quality. Today, “Ray-Ban” is still the most popular sunglass brand around the world.

In 1853, German-American John Bose and Henry Lambert launched Bausch Lomb, which specializes in the development and production of eye care products. In early 20th century, Bausch Lomb could already produce quality optical lenses in large quantity by leveraging its advanced technology and excellent processes. In 1920, the US Air Force entrusted Bausch Lomb with the developmnent of the special goggles for pilots to oppose the dazzling glare in upper air. Several years later, the first sunglasses with green lenses debutted in the world. Such sunglasses can resist both glare and ultraviolet rays and are therefore highly popular with pilots.

In 1930, the sunglasses produced by Bausch Lomb for pilots were formally included by US Air Force into its exclusive goods. In 1936, Bausch Lomb put the sunglasses into the market and renamed them as “Ray-Ban” in 1937. “Ray” means luminous beams and “Ban” means obstruction. That was when the brand “Ray-Ban” formally came into being. In 1930s, it was a vogue for Hollywood stars to wear sunglasses. This caused Ray-Ban sunglasses to become a fashionable ornament greatly favored by American people shortly after they were launched. 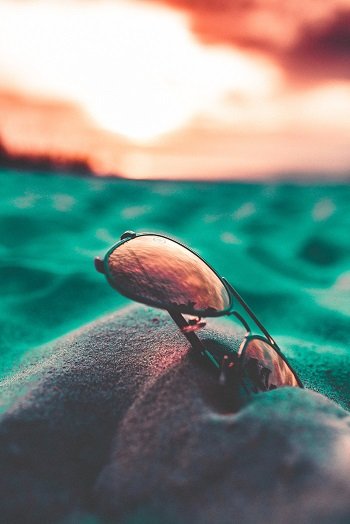 In 1940s, Ray-Ban produced for US Air Force the sunglasses with oblique reflective lenses, which provided users with maximum eyesight protection. During the Second World War, US pilots wearing leather jacket with novel Ray-Ban sunglasses on their face turned up around the world. The rakish and valiant images greatly enhanced the popularity of Ray-Ban sunglasses in the world. At that time, even American five-star general MacArthur often wore a pair of sunglasses that were also a product of Ray-Ban. Like ZIPPO lighters, Ray-Ban sunglasses that underwent the Second World War became one of the marks of US armed forces. After the end of the war, they became a fashion product that quickly swept across the globe.

With the elapse of time, sunglasses got more and more popular and gradually evoved from a fashionable ornament to a necessity in everyday life. In 1950s, Ray-Ban rolled out fashionable sunglasses with multi-color lenses and large frames into the market together with a series for females. In 1960s, the anti-crack lenses of Ray-Ban came out to pair up with the frames of an unconstrained and stylish design. In 1970s, Ray-Ban introduced sunglasses of changing colors that can provide the clearest vision for the wearers in different lights. In mid 1980s, Tom Cruise starred Top Gun, where he wore a pair of Ray-Ban sunglasses for pilots. The image went popular around the world and stirred up another upsurge of Ray-Ban sunglasses. Then, the US Popular Association issued a highly important design award to Ray-Ban in recognition of its outstanding contributions to popular fashion.

From the creation of the brand to now, Ray-Ban has been the bestselling brand of sunglasses in the world. What supports this achievement is the consistent quality and elegant design of Ray-Ban. By making continuous innovations in optical technology, Bausch Lomb has enabled quality lenses to become one of the biggest selling points of Ray-Ban sunglasses. Ray-Ban lenses use sheet glass primarily and have a great shading effect. All the lenses can obstruct 100% harmful ultraviolet rays and, meanwhile, filter other harmful rays, such as infrared rays. The polarized light film technology being used now has greatly reduced the damage caused by rays to eyes. The design and manufacturing of Ray-Ban frames are also excellent to provide people with comfortable wearing in whatever circumstances.

Over the years, Ray-Ban has witnessed a continuous increase in the category of its sunglasses, which formed the series of traditional, modern and future styles. Furthermore, for different consumption objects, Ray-Ban sunglasses are further divided into three types: gentlemen, ladies and sport, which feature respectively the dignity and nobleness of gentlemen; the charm and grace of ladies; the sense of sunlit motion for sport.

The eternal design, simple style and high quality have undoubtedly become an important element in the ability of Ray-Ban brand to stay young after nearly 70 years.

Ray-Ban was acquired by an Italian spectacles manufacturer in 1999.